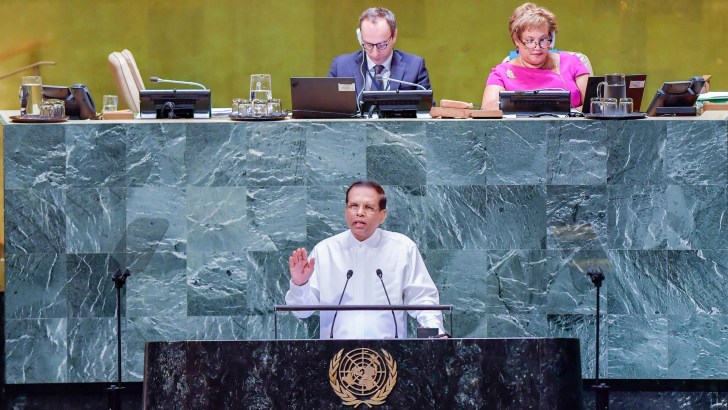 May the Noble Triple Gem bless all of you !

I am extremely pleased to participate in the 73rd Session of the United Nations General Assembly representing Sri Lanka for the fourth consecutive occasion.  Sri Lanka, as a Member State of the United Nations, is fully committed to adhere to its Charter, Conventions and Agreements and their implementation.

As Head of State, I am pleased to note the progress that has been made by Sri Lanka and my government during the past three-and-a-half years. When I was elected by the people of Sri Lanka as Head of State in January 2015, the Executive Office that I hold today, had excessive powers, which were comparable to those of a king, or even an emperor.  I am pleased to state that I was able to relinquish these emperor-like excessive powers and transfer them to the Parliament of Sri Lanka, fulfilling the utmost duty of an elected leader.

During the past three-and-a-half years, democracy has been strengthened in my country.  In addition, human rights, freedom of the people and the media as well as the independence of the judiciary have been strengthened. Therefore, the Sri Lanka of today is not what it used to be three-and-a-half years ago. I can clearly state that the Sri Lanka of today is a society which is more inclusive and humane.

We, as Member States of the United Nations, must consider it as our duty and responsibility to comprehensively study and reflect upon the contemporary political developments, economic disparities, and common challenges faced by humanity.When speaking of international political developments and trends, we must in particular focus our attention on refugees that have become a global issue as there are a large number of refugees all over the world. Therefore, I believe that the efforts of the United Nations, its Member States and other organizations dealing with the issues related to refugees must be broader and more effective.

Sri Lanka is a country that follows moderate policies with regard to the exercise of its foreign policy. We are a senior member of the Non-Aligned Movement. The 1976 Non-Aligned Summit, which is considered one of the most successful, was held in Sri Lanka. Within the framework of non-alignment, we consider all nations of the world as friends. I am glad to note that Sri Lanka does not have adversaries in the contemporary world.

We all know that poverty is one of the fundamental problems affecting the world. I am of the view that the United Nations can do more to address the issue of poverty. We know that today, hundreds of millions of people across the world suffer from hunger. Climate change, income disparities, and certain shortcomings of governments to fulfill obligations towards their citizens, are among the key causes of poverty. The negative effects of climate change on economies have further exacerbated this problem. Therefore, it is essential to assist and support countries which are most vulnerable to the effects of climate change. I must mention that just as poverty plays a central role in many problems that plague the world, trafficking in weapons, illicit drugs and narcotics have also become grave threats to humanity.

In this context, I am pleased about the agreement reached under the auspices of the United Nations and the leadership of the US President Donald Trump on a ‘Global Call to Action on the World Drug Problem’, yesterday. It is necessary that all countries do more towards combating illicit drugs with the assistance of the United Nations, as a matter of priority.

Within the framework of action of the United Nations, we must all work at national and international levels towards the implementation of the agreed outcomes of the Paris Agreement on Climate Change, finalized under the guidance of the former UN Secretary-General Ban Ki-moon, for the benefit of humanity as well as other living beings, our streams and rivers, and planet Earth as a whole. I must state that Sri Lanka, as a UN Member State, gives utmost priority to these endeavours.

Speaking of internal matters of my beloved motherland, as I stated earlier, we have broadly strengthened democracy, human rights, fundamental rights and media freedom in the country. We must reflect on the situation of our country that prevailed forty years ago, and on the conflict that lasted for nearly thirty-years. It has been almost ten years since terrorism and armed conflict ended. During these ten years we have undertaken a broad range of reforms.  My government in particular, has implemented several important steps in the post-conflict context. We have implemented, and continue to implement many programmes aimed at fostering national harmony and reconciliation, and ensuring non-recurrence of conflict. As a country that has fulfilled and continues to fulfill our human rights obligations, we respectfully request the United Nations and all other countries to continue to assist us in our endeavours.

Sri Lanka’s security forces defeated one of the most ruthless terrorist organizations in the world. As a result, Sri Lanka remains an undivided country that enjoys sustainable peace. Therefore, I must respectfully recall the yeoman service rendered by our security forces in defeating a dreaded terrorist organization, and I take this opportunity to thank our security forces for their great sacrifices in ushering peace and ensuring territorial integrity of Sri Lanka. At a time when almost ten years have passed since the end of the conflict, I call upon the international community to look at my country from a new perspective with new ideas. I call on you all to refresh your views on my noble motherland and assist us in our efforts towards achieving economic development, prosperity, and a secure future as a country at peace following a deadly conflict; as a country that is strengthening national reconciliation; as a country where national harmony prevails; as a country that has taken and continues to take every possible step to prevent recurrence of another conflict; and as a country that protects and upholds human rights.

I respectfully request you to allow us the opportunity to resolve our own issues. The independence of a country is of paramount importance. I seek your support in our efforts, including in strengthening democracy and enhancing human development, while respecting our sovereignty. The sacrifices we have made and the initiatives we have taken in this regard are important for us in resolving our issues. As an independent country, we do not require foreign interference or threats. As a strong nation, we request all of you to allow us space to resolve our problems and to progress as an independent country. In this context, once again I wish to reiterate our request for your assistance and support for us to resolve our own issues as Sri Lankans. I further request your support in the efforts of my government to alleviate fear and suspicion among the communities living in our beloved motherland, and to build greater harmony.

As I stated before, it is imperative to accord priority to address the issues of people in Sri Lanka and the world over who are poverty-stricken. We must find solutions to their problems, taking into consideration the ideas and thoughts of the younger generation.

Considering all of the above, I wish to finally reflect on what Lord Buddha stated in the Salla Sutta of the Samyuktha Nikaya in the Thripitaka where it is said that a man pierced by a dart suffers twice: firstly, the physical pain caused by the dart, and secondly the mental agony caused in recollecting the act. Similarly, the people of Sri Lanka have suffered both the physical pain of the prolonged conflict as well as the mental agony caused by the recollection of those unfortunate experiences. Therefore, it is no one else but the people of Sri Lanka who need to be relieved of this pain. In conclusion, I respectfully request all to extend support to my people and country to progress towards a  just, fair, equitable and humane society with economic prosperity, alleviating the pain that my people have endured.

Thank you. May the Noble Triple Gem bless you. 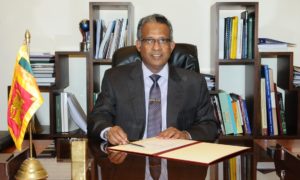 Prasad Kariyawasam , New Secretary to the Ministry of Foreign Affairs 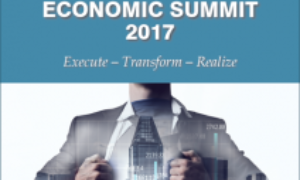 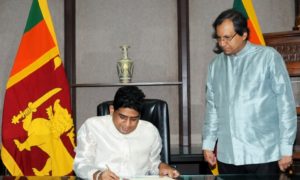