Tourist Arrivals for 2018 Reached 2 Mn Mark in November: The cricket loving Barmy Army from the UK boosted tourist arrivals to Sri Lanka in November, registering a growth of 17% to 195,582 with arrivals from UK soaring by 61% to 22,000. Total arrivals during the first eleven months of the year reached the 2 million mark to finish at 2.08 Mn in November 2018.

In agricultural sector, the rice output grew by 46,96 % reserving from the 38.2 % contraction experienced a year earlier. Manufacturing grew by 2.2 % with apparel growing by 3.79%  and contruction activities up by 2.5 %. In service sector, telecommunication services grew by 14.8 % meanwhile financial services grew by 12.4 %.

The infrastructure sector attracted the highest amount of FDls during the first nine months of 2018 accounting for USD 1,416 Mn which is a 3.2 fold growth compared to the USD 347 Mn received during the same period of 2017. Port container terminals recorded USD 850 Mn as inflows accounting for 58% of the total amount received for the infrastructure sector and even higher than FDI received for all sectors during the first nine months of 2017. This growth was mainly driven by the transfer related to the Hambantota Port terminal. 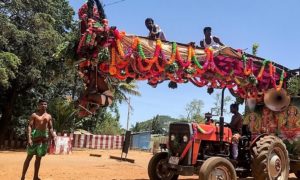